What can the EU do about the rule of law in the Western Balkans?

– Elements for a new enlargement methodology

The on-going debate at the European Union (EU) and Member State (MS) levels on the new enlargement methodology indicates there is a different understanding across Europe on how to renew the accession process. The French veto over the start of EU accession talks with North Macedonia and Albania, despite the European Commission’s recommendation, and a non-paper coming from the same address, have divided stakeholder views in the Western Balkans and the EU. Actors are split between those who find the necessary impetus to revitalize the process in the French document, and those who see it only as a new attempt to keep the Western Balkan countries at a distance, with aggravating steps for candidate countries that will not necessarily lead to an acceleration of the democratization process. Another recent proposal by nine EU Member States, which was a direct response to the French document, suggests revision of the process on alternative grounds and with additional instruments. In this policy brief, we focus on lessons learned from the use of EU instruments to strengthen the rule of law so far. By looking at new proposals made from recently published documents, we also propose elements for a new methodology for the enlargement process which relates specifically to rule of law reform in the Western Balkans. This brief was developed within the framework of the ‘Rule of law in the Western Balkans: Reinventing the rules of the game’ project, which Politikon Network implements together with CRTA from Serbia and Tim Institute from North Macedonia with the support of the European Fund for the Balkans (EFB) through the Think and Link Regional Policy Programme 2019.

Elections in Montenegro: Stuck in an Envelope

The ‘envelope affair’ broke on 11 January, 2019, after the release of a video clip showing the President of the ‘Atlas Group’, Duško Knežević, handing an envelope to the former Mayor of Podgorica, Slavoljub Stijepović, which contained 97,500 euros for the ruling Democratic Party of Socialists (DPS) and was intended to be used for the 2016 parliamentary election campaign. Knežević claims that he acted in agreement with the DPS President, Milo Đukanović. The DPS leader has confirmed the donation, adding that many ‘helped’ the DPS in this manner, not only Knežević. To the uninformed viewer observing the character of the Montenegrin political system, it would seem logical that the affair would prompt swift resignations and a quick reaction from the competent institutions. On the contrary, what ensued was a virtual stalemate, with the main actor in the affair still maintaining his position as General Secretary of the President and his membership in the DPS Presidency. Illegal donations for the purposes of election campaigning are an ingrained part of the Montenegrin reality, even now that there is concrete evidence to prove it. However, the conduct of Montenegro’s institutions hasn’t changed much since the ‘envelope affair’. Therefore, this study aims to chronologically describe the (non)engagement of institutions, as well as work patterns which influence the perception of their politicisation. Through an analysis of undertaken steps and the institutional response to an affair that cast a shadow over the Montenegrin political scene for many months, this case study offers a prism through which the lack of responsibility and transparency in the country’s institutional system can be viewed.

Media in (Trap of) Election Campaigns: the Case of Serbia

This paper aims to shed more light on the role of the media in electoral campaigning in Serbia, with a particular focus on the roots of most pressing vulnerabilities, problems

and obstacles that are hampering media ethics and equal media representation. In order to grasp the extent and consequences of the problem of media performance in the elections, the paper provides an overview of the state of play of the media scene in Serbia. The focus is placed on the electronic media, as it has the largest influence in comparison to other media formats and consumes the largest amount of money that political actors in Serbia spend on election campaigning, with particular emphasis on strategies and patterns for establishing political and economic influence on media in Serbia. Another key component influencing the electoral conditions in Serbia that is related to the media is the citizens’ right to information, which has not been institutionally protected during the past elections in Serbia. This lack steams both from incomplete legal and institutional framework as well as from the lack of readiness to implement the existing legislation, which is illustrated through the analysis of the work of the Regulatory Body for the Electronic Media during 2016, 2017 and 2018 election cycles at national and local level. Voters’ right is to be informed about the electoral offer as a prerequisite for making informed decisions for whom to vote. It is hence necessary to guarantee equal representation of all electoral lists and candidates in the electronic media. Along these lines, the paper offers concrete recommendations for overcoming key challenges hampering the performance of the media in the framework of election campaigning.

Campaign financing, in its most broad and universal meaning, is often defined as the “raising and spending of money intended to influence a political vote, such as the election of a candidate, or a referendum”. Regardless of whether it occurs in develop 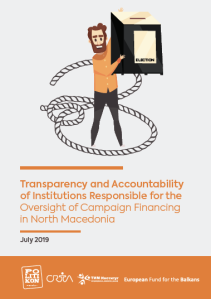